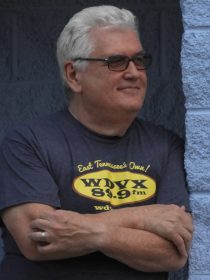 Co-founder of WDVX, Tony Lawson, was born in Eastern Kentucky, moved to Campbell County in a coal truck when his dad got a job in the mines there when he was four. Tony heard lots of music from different genres through his family. His Mother sang in the Woodson Gap Singers singing at churches throughout rural Appalachian hillsides and hollows in East Tennessee. His Father was a blues fan that listened to WLAC Nashville and his Aunt was a country music fan listening to Conway and Loretta, George Jones and more. Fascinated by radio at an early age, he was calling in requests and developed a pretend station at his house. Tony listened to all sorts of radio including WNOX and WQUT, Johnson City.

Tony headed to ETSU in Johnson City and landed his first broadcast job at WQUT. This was a dream at 20 years old. Tony worked in commercial radio through 1997 programming radio stations throughout the southeast in Charleston, SC, Montgomery, AL and in Knoxville at U-102 and WIMZ.

In July 1991 Tony began working on his next dream, WDVX. While hosting the Good Time Oldies show at U-102 Tony set out on a project that would change his life. He incorporated Cumberland Communities Communications Corporation that led to the creation of WDVX. The fire was lit in 1996 when Don Burggraf joined the organization and brought the skills and support that was needed to build and launch East Tennessee’s Own WDVX. Together the two have travelled to many festivals and places to broadcast live and create content for WDVX. Tony loves creativity, music, baseball, cooking, birdwatching, his family and his lovely wife Alexia.