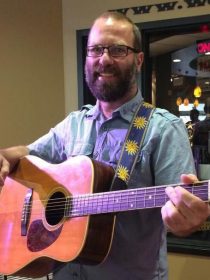 Sean McCollough is a National Parent’s Choice Award winner, a multi-instrumentalist, and a seasoned performer. He also teaches musicology at the University of Tennessee and is a teaching artist in the schools.

Sean has over 12 albums to his credit, including three records for kids. His most recent family recording, Earworm, includes nine original songs, four covers, and appearances by Grammy-nominated Molly Ledford and well-known children’s artist Billy Jonas.