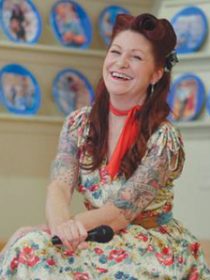 Red Hickey, the youngest of three girls, was born and raised in Knoxville, Tennessee. She went to art college in fashion design in Atlanta and London, England, and worked in the fashion industry as an assistant designer for a lingerie manufacturer. During her 15 years in Atlanta, Red was part of the ‘Redneck Underground’ which regularly frequented honky tonks seeing many of the bands she now plays on the air.

When she moved back to Tennessee in 1999, she wanted to be part of WDVX and started volunteering at WDVX during fundrives. Station manager Tony Lawson offered her a classic country show called Hillbilly Fever on Thursday nights. Several months later she joined WDVX daily.