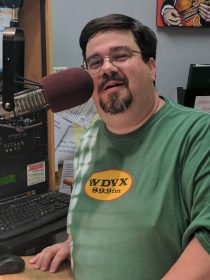 Paul West hails from the southern foothills of the Appalachian Mountains in Alabama. His “day job” as a Geologist brought him to Knoxville in 2009. He and his lovely wife spend most of their free time traveling and enjoying outdoor activities with their two wonderful children.
Paul has enjoyed a broad range of music since attending his first concert in 1993. He now claims to have been to hundreds of local, regional, and national music concerts and can prove most of them with his collection of ticket stubs. His greatest influences are often cited as the Grateful Dead and Bob Dylan and are largely the reason for his interest in 78 rpm records and early mechanical phonographs. Shortly after collecting his first 78s, Paul began volunteering at WDVX events.
“At some point, I felt compelled to learn about the influences of my favorite musicians. WDVX provides a great avenue to learn about this roots music through their staff, programming, and live events.”