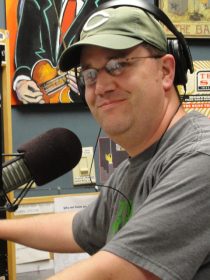 Nelson Gullett was born in the deep dark hills of Eastern Kentucky in a town called Paintsville. He says Loretta Lynn’s cabin on the Hill in Butcher Holler was not far from there. He cut his musical teeth on pop artists of the 80s, but somewhere along the way, his mother instilled a love for songwriters such as Paul Simon and Jim Croce, while his dad exposed him to rockabilly rebels such as Jerry Lee Lewis and the pioneers of rock and roll. Nelson was introduced to the band R.E.M., and their blend of southern folk/rock in high school. In college, it was the Dave Matthews Band’s brand of roots-based jams that provoked him to drive for hours just to get to the next show.

And all of that brought him to WDVX. In 2001 he started hosting a called called Americana Crossroads on Morehead State Public Radio. Then, in 2004 he met his now wife in Knoxville and started spending more time in the region, where he discovered WDVX. And the rest is history.

“[Americana] borrows from many styles and belongs to none, mixing songcraft with musical virtuosity, and often melding a delicate vocal melody with a blast of unbridled energy and emotion.”

This Week in Americana