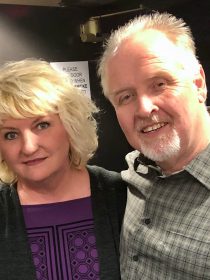 Lewell and Lora Molen became childhood sweethearts when Lora’s dad, Jim Dutton, formed The Kentucky Grass with Lewell’s brother in law, Lawrence Lane, around 1970. This band also included Dave Marshall and a young Dwight Dillman. Lora’s dad went on to play with some bluegrass greats such as Red Allen and Earl Taylor before starting a bluegrass gospel group, The New Gospel Ship, with his wife, June.

Lora spent her teenage years traveling around the Ohio area to bluegrass festivals playing bass and then guitar in her parent’s band. Lewell was also making the festival rounds with Lawrence Lane & The Kentucky Grass, which included Lewell’s sister, Mary.

Lewell and Lora left Ohio for Maryville, TN in 1985. Lewell spent several years traveling on the road with country artists such as Lorrie Morgan, which included exciting performances on the Opry and The David Letterman Show. These days he stays close to home playing locally in a rhythm and blues band, The Chillbillies ,and an oldies band, Classic Boulevard. Lora recently wrote a book called TAKE ME BACK (THE PEOPLE, THE FESTIVALS, AND THE MUSIC OF BLUEGRASS FROM YESTERYEAR). Lewell and Lora’s most recent project is a CD of children’s educational songs, LAUGHING AND LEARNING WITH LOTTIE & LEW.

They have two children, Josh (and wife Laura), and Molly (and husband Jordan) and two grandchildren. The Molen family own and operate Mo-Jo Music Recording Studio. They are very excited to be a part of the WDVX family hosting The Cumberland Sunday Morning Show.

Yola - Dancing Away In Tears - Stand For Myself
Listen Live →