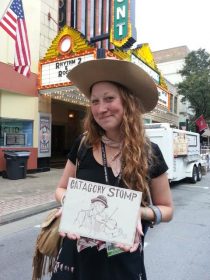 Katie happened upon her dad’s record collection at an early age, familiarizing herself with artists like Doc Watson, Norman Blake, and John Hartford. She credits her dad for introducing her to WDVX, which he discovered shortly after Katie’s family moved to Knoxville during “the camper days”. She found her love for radio as a student majoring in Journalism and Electronic Media at the University of Tennessee. Since becoming a student DJ at WUTK in September of 2007, she has spent thousands of hours on the air at WDVX, as well as on WUTK The Rock and Radio Bonnaroo.
Katie started at WDVX as an intern in early 2008 and eventually took over as Monday night DJ, where she developed her specialty show “The Category Stomp”. She has recently taken over the air shifts of her mentor and WDVX co-founder Tony Lawson three days a week (Tuesday-Thursday). She is WDVX’s Triple A Music Director, and works extensively on programming, including the overnight Americana Mix. Katie produces WDVX Fund Drive Thumb Drives, World Class Bluegrass segments, and other live content for airplay and archiving.

“The first sticker I had on my truck when I was 16 was a WDVX bumper sticker. I love being a part of the station, and thanks so much to everyone who has made me feel welcome, or called, or even just listened. I’d love to hear from you on Monday nights during the Category Stomp!”