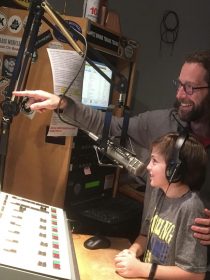 Judah Goodall is WDVX’s self-described, “most talented ten year old DJ – true story”. Now 12, he can be found behind the mic on Saturday mornings from 11-12, sandwiched between the Kidstuff stylings of Sean McCullough and the Blue Plate. Sean, Paul Amero and the late great Doug Lauderdale have all served as mentors to the budding radio persona.  The first musician to strike Judah’s fancy was Johnny Cash, and from there he expanded his musical palette to include such diverse favorites as Scott Miller, Steelism, Bombadil, Creedence Clearwater Revival, Sam & Dave, and Booker T. & the MG’s.  Judah started on the mic back in 2016, doing announcements for Kidstuff’s monthly live show, and soon was hauled back into the booth by Paul Amero to test his mettle at the console.  These days, you can catch Judah and his dad, John, on Saturdays, spinning vinyl and CDs, of their favorite Americana, Classic Rock, Soul, Funk, and more.