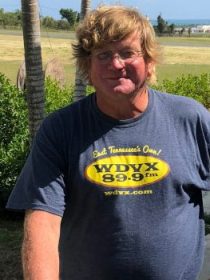 I’ve called East Tennessee home for nearly 40 years, but I am originally from Springfield, Virginia, a suburb of Washington, D.C. When I was 11, my older brother was home from college, and he played me a couple of albums he was listening to quite a lot: “Doc Watson on Stage” and “Workingman’s Dead” by the Grateful Dead. Hearing those albums introduced me to a whole world of musical possibilities and set me on a life long journey of musical exploration. In addition, the D.C. area was a hot bed of bluegrass when I was growing up and I was fortunate to see many of the first generation masters and the great D.C. area bands such as the Country Gentlemen and Seldom many times. I was in the right place at the right time! I’ve seen lots of live music over the decades, including numerous Grateful Dead shows.
I started hosting shows on WDVX in 2003 and it is such a great opportunity to share music I enjoy with our listeners. On Rise and Shine on Saturday mornings, I follow Steve Gulley’s approach during the week with lots of bluegrass with a little bit of classic country. On the Clinch River Breakdown on Sunday afternoons, I mix bluegrass, old-time, blues, vintage recordings from the 1920s – 1940s, classic country, folk, and other musical odds and ends. Expect to hear anyone from Uncle Dave Macon to Flatt & Scruggs to Jim Lauderdale and many others.
Send me an e-mail if you’d like to request a song or just comment on the music.