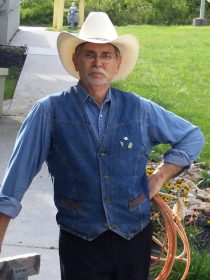 After an almost 40-year absence from radio Spencer returns to the air as a volunteer at WDVX. He worked in radio from 1970 to 1981 at several stations in Texas, but received most of his experience at KWTX in Waco, Texas.

He left broadcasting to work as a writer and photographer for organizations like Baylor University, Covenant Health in East Tennessee, and a citizens’ advisory board to the Department of Energy’s Environmental Management program in Oak Ridge. But radio was never far from his mind.

When he retired, he wanted to get back into broadcasting in some form or fashion and began volunteering at WDVX. He pestered Katie Cauthen about doing some occasional fill in work on air and she was good enough to let him cover some shifts. Tony Lawson then asked if he’d like to do a few hours each Saturday afternoon, which is just right for an old retired radio guy.

“Thanks, Tony, for the opportunity and thanks to Grace Toensing for breaking me in.”