Want to get better terrestrial reception of WDVX? WDVX is a low-powered station with an effective radiated power output of only 200 watts from our tower situated on the Anderson-Campbell county line above Lake City, TN. Most people living or traveling within 15 miles of our Cross Mountain transmitter site should receive a good strong signal and good reception from 89.9 MHz. We also operate translators that serve North Knoxville from atop Sharp’s Ridge on 102.9 MHz, and the French Broad River valley from Bay’s Mountain, between Seymour and Kodak at 93.9 MHz. 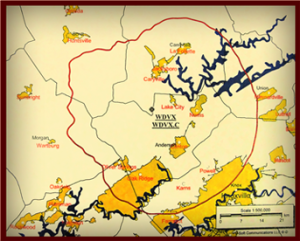 Transmission facility improvements have been made over the past several years with your support. Most automobiles are equipped with radios that do a very good job receiving moderately weak signals.

How to Improve Reception

Listeners with FM component tuners and receivers usually require an external FM antenna to get reception.

The most common type is the “T” type made from “twinlead” whose top of the “T” is approximately 64 inches long. Attach the two wires of the lower lead-in section to the “300 ohm” terminals of your tuner. It has the best chance of success when placed on or near a window that looks toward the direction of Lake City. Experimentation of locating the antenna in different places may yield a “hot spot.”

The best antenna is one mounted on a pole extending 20 feet or more above ground whose wire comes into the building and attaches to the terminals at the rear of the tuner. We highly recommend that listeners seeking reception in low-lying areas further than 20 miles away from our tower site near Lake City install an outdoor antenna.

Two hundred watts is the maximum amount allowed by the Federal Communication Commission. Although listeners have asked if WDVX will be eligible for a power increase, that’s not an option based on technical standards and the potential interference WDVX could present to other stations that operate on or near 89.9 MHz in other radio markets. Please address technical questions and comments to dburggraf@wdvx.com.