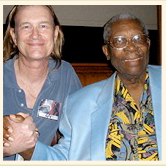 Johnny Mack was born in Kansas City, Missouri, one of the blues strongholds of the industrial North in the 1940s. He was raised in St. Louis, which he notes is another big blues city. An early passion was rock & roll and he became an avid record collector. Johnny Mack’s biggest influence is Brian Wilson of the Beach Boys, but he also loves the Beatles, Stones, Neil Young, Richard Thompson & R.E.M. A graduate of St. Louis University with a major in broadcast communications, he married his high school sweetheart in 1970 and became a bookstore manager. His wife’s job brought them to East Tennessee in 1990. Since then he helped found the Knoxville Blues Society in 1996. He’s been hosting Johnny Mack’s Friday Night Blues Attack since January 1998.

He welcomes emails with musical suggestions and requests, saying “If it’s the blues, I’ve got it.”

Check out this article about Johnny & his blues attack!

Here is another artical about Johnny.

Shovels & Rope - The Devil Is All Around - Swimmin' Time
Listen Live →