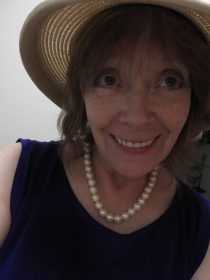 A native of Toledo, Ohio, Grace moved to Tennessee in 1984 and has been with WDVX since 1999, (the camper days). Grace edits the WDVX website and produces many of the photos and graphics on WDVX posters, and social media. You will find her spinning the Americana Mix each weekday from 9am til 12pm.

Here’s a note from Grace:

Check this out! A fella wrote a song about WDVX & me. Totally awesome! Check him & this crazy little video out.  He also joined me in the studio when he released his Audio Quicksand cd. Big fun! Come to find out this Mark Radice character has toured with folks like Cheap Trick & Aerosmith, wrote songs that have been recorded by people like Frankie Valli, Barbra Streisand, Barry Manilow and wrote & recorded for Sesame Street… The list goes on and on. Be sure to subscribe to his You Tube Channel and thank him for the song!