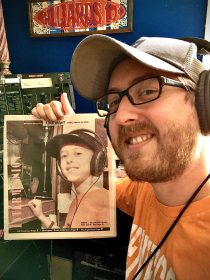 Alex Leach hails from the mountains of East Tennessee, in the small town of Jacksboro. He has been part of the WDVX family since February of 1999, at the ripe age of 9. After meeting Tony Lawson in the camper, Alex was asked if he would like to start co-hosting “The Bluegrass Special,” and that was all it took. Alex’s papaw, Scoby Asbury, brought him week after week as a kid, and now at age 31, Alex continues hosting the same show each and every Tuesday night from 7-10. He has won SPBGMA’s Bluegrass DJ of The Year twice, and enjoys spreading the music he loves over WDVX’s airwaves. You can also catch Alex out on the road with his band, “The Alex Leach Band.”