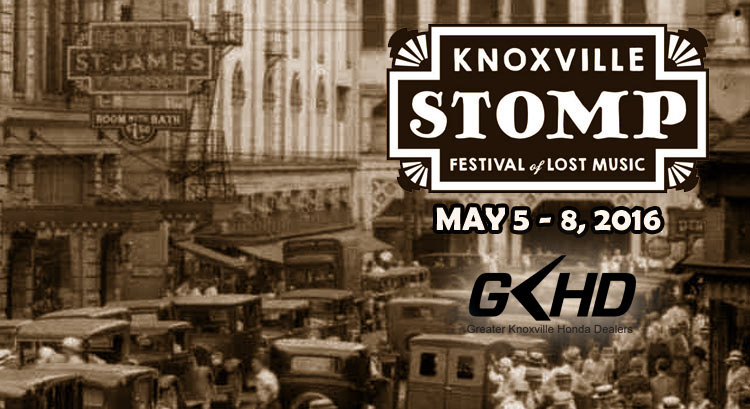 Knoxville has a rich music history, and to celebrate some of that rich history, WDVX is proud to help host the Knoxville Stomp. This event is being made possible through a collaboration between Knox County Public Library, the library’s Tennessee Archive of Moving Image and Sound (TAMIS), the East Tennessee Historical Society, and Visit Knoxville.

WDVX will host a foot-stomping evening of live music on Market Square. Get ready to hear a slew of bands perform their own versions of songs from the Knoxville Sessions. The line-up includes local favorites like the Streamliners Swing Orchestra and the Bearded as well as great visitors like New Orleans’ own Roochie Toochie and the Ragtime Shepherd Kings.

From 5 – 6 p.m., host Joe Bussard will do his usually pre-taped program live in the WDVX Studio.

Other WDVX Events for the Knox Stomp

WDVX radio host Bradley Reeves will be doing a special edition of his show, Jazz Me Blues, on Thursday, May 5th with some great previews for the Stomp. His guest that week will be Ron Brown, collector of  extremely rare 78 rpm recordings, and contributor the museum exhibit “Come to Make Records: Knoxville’s Contribution to American Popular Music” that opens April 15 with live music, a film screening, and lots of fun!

Ron can be seen in the 1985 film LOUIE BLUIE, asking Howard Armstrong to autograph his rare 78 copy of Armstrong’s 1930 Knoxville Sessions recording “Knox County Stomp” (released under the name “Tennessee Chocolate Drops”). This autographed sleeve (which is really a work of art) will be on display in the exhibit. Ron will bring along a stack of the rarest blues, jazz, and Cajun 78s on the planet to spin on the May 5th WDVX Jazz Me Blues program.

A four-day festival, the Knoxville Stomp celebrates the re-mastering and release of a newly recovered collection of recordings made at Knoxville, Tennessee’s St. James Hotel in 1929 and 1930 known as the Knoxville Sessions.

For a sneak peak at photos that are going to be featured in the upcoming Bear Family Box set THE KNOXVILLE SESSIONS 1929-1930: Knox County Stomp, click here.