Tennessee Shines Radio Show is performed for a live audience every Wednesday at 7pm at Boyd’s Jig & Reel musical pub in Knoxville’s historic Old City. The show is broadcast live on WDVX FM and WDVX.com. Tickets are $7 plus applicable fees in advance, available HERE or $10 at the door starting at 6pm. 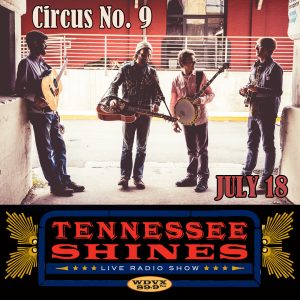 Circus No. 9 is East Tennessee’s own Progressive Bluegrass outfit, blurring the lines between Bluegrass, Jazz, Jambands, and more. Described as “John Hartford meets John Coltrane,” the group has appeared alongside artists including David Grisman, Bryan Sutton, Larry Keel, and more. Comprised of musicians Matthew Davis, Thomas Cassell, and Vince Ilagan, Circus No. 9 is one of the most exciting new bands on the acoustic music scene today.
“Circus No. 9 represents everything that’s good about the new generation of acoustic music. These guys already exhibit a maturity and musicianship that has me thinking we’re going to be hearing great stuff from them for a long time!” – Bryan Sutton
Banjo extraordinaire Matthew Davis is the winner of both the National Banjo Championship and the Rockygrass Banjo Contest, not to mention the achievement of his musical chops at just age 18. Davis has performed on the Grand Ole Opry, among other venues and shows around the country.
On the mandolin is Virginia’s own Thomas Cassell, a now Tennessee transplant. Cassell is the winner of the 2016 Rockygrass Mandolin contest, and has performed on stage beside artists including Darrell Scott, Bryan Sutton, Aofie O’Donovan, Mike Marshall, Julian Lage, Billy Strings, and more.
Holding down the low end for the band is Knoxville’s Vince Ilagan, also holding a Bass Performance degree from the University of Tennessee and years of studio and touring experience. Ilagan has performed with artists including Justin Townes Earle, Jeff Sipe, Scott Miller, and many others. 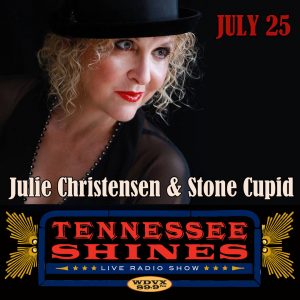 Julie co-fronted post-punk rockers Divine Horsemen with Chris D and is a veteran of Leonard Cohen’s bands (and the documentary I’m Your Man) “A Sad Clown” is her 7th record , an acoustic yet gritty offering of her own music and a few gems by fellow East Nashville friends Tim Easton and Darrin Bradbury; and the stunning kind of interpretation of Tom Waits’ Hold On that only Julie can deliver.

She spent time as a jazz chanteuse, tours, has performed and recorded with Steve Wynn, Van Dyke Parks, John Doe, and Exene Cervenka.

“Her swagger is true to her rebellious punk-rock roots and refined through working with the likes of Leonard Cohen, Iggy Pop, and Public Image Limited.”

“Julie Christensen’s music is deep and wide, speaks of experience. Her voice has amazing range, her own songs are little gems and her choice in material is assured. Wherever she is taking you, you’ll want to go. “ – Jeff Turmes 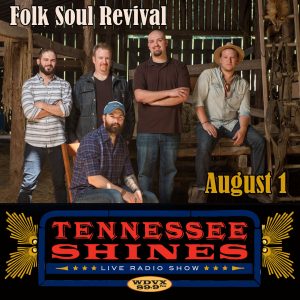 Based in Bristol, VA/TN, a.k.a. the birthplace of country music, FOLK SOUL REVIVAL is one of southwest Virginia and northeast Tennessee’s most beloved and sought after acts. Performing original roots-rock, the quintet’s distinct, radio-ready sound and back-porch instrumentation have garnered success with high profile gigs opening for the likes of Travis Tritt, Jason Isbell, Eric Church, Justin Townes Earle, Dr. Ralph Stanley, and more. FSR’s loyal fan base, fondly referred to as “The Congregation,” consistently packs sold out shows across the southeast while singing along with the band word for word.

FSR is a mainstay act at Bristol Rhythm & Roots Reunion which boasts more than 60,000 attendees. The band has also performed at Floydfest and are among the best-selling acts to perform at the legendary Carter Family Fold and The Down Home.

FSR frontman Daniel Davis achieved 2nd place in the prestigious Chris Austin Songwriting Contest at Merlefest in 2013 for the song “Homesick.” The band’s third album, Prompting the Dapperness, rose to #12 on iTunes’ country chart and reached #99 on the day of its release. The band also climbed to #10 on Billboard Magazine’s Heatseekers chart (South Atlantic Division). Virginia Living readers also listed them among southwest Virginia’s Top 3 bands in 2012. In 2011 FSR was voted Virginia Is For Lovers Band of the Year at Bristol Rhythm & Roots Reunion. Their second album, Words Off A Tongue, was listed among No Depression’s Top 15. The band has also been spotlighted on Music City Roots and Sirius/XM’s “Outlaw Country.” 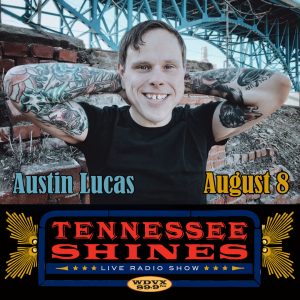 No one ever said country music had to be simple, and when Austin Lucas began thinking about the follow-up to his critically acclaimed 2013 album Stay Reckless he had a lot on his mind. The Indiana troubadour wanted to do something not only different from his own work, but unlike anything else being done in the realm of country music and Americana. Between The Moon And The Midwest marries traditional & cosmic country sounds with sharp, vivid storytelling in a fully realized album concept.

The songs began to emerge during the 2011 Stay Reckless sessions and tour cycle; a tumultuous time masked by non-stop life on the road. With his marriage dissolving, Lucas began pouring his pain into fictionalized characters. Stay Reckless captured the experience of his divorce, and Lucas put those first few songs on the backburner while he toured heavily behind the album and avoided reflecting on the state of his personal life.

Two years later he found himself dealing with crippling anxiety and depression. Returning to the songs with a darker perspective while drawing on his life experience in rural Indiana, he crafted an intimate song cycle capturing the intricacies of friendship, love, betrayal, and the pain arising from the nature of those relationships. Being in a state of despair allowed Lucas to inhabit the characters in the story and he emerged from the darkness with the songs for Between The Moon And The Midwest.

Citing influences like Buck Owens and George Jones, Lucas had wanted to record a fully country album since 2011’s A New Home In The Old World. Enlisting the help of Joey Kneiser – guitarist and vocalist of the Tennessee band Glossary- they crafted a sound that, while rooted in outlaw and hard country, was infused with 60s psychedelic pop like the Zombies and the Beach Boys circa Pet Sounds. The result is a finely produced sound layered with guitar, vocal harmonies and atmospheric harmonics. Between The Moon And The Midwest is unique in its mix of sounds, songwriting, and influences.

From the country-gold sound of “Unbroken Hearts”, the infectious “Ain’t We Free”, to the plaintive truths in “Wrong Side of the Dream” and “The Flame”, he delivers an album at once timeless and modern. Boosted by guest appearances from John Moreland, Lydia Loveless, and Cory Branan Between The Moon And The Midwest finds Lucas at the top of his game and taking his music into exciting new territory. 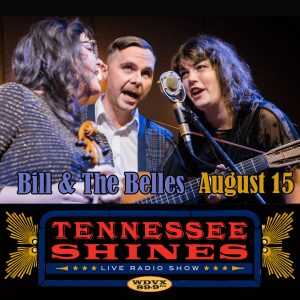 Bill and the Belles capture the freewheeling, lighthearted approach to music that has endeared them to listeners of every generation. With a spirited sound that falls somewhere between old-time country and vaudeville, the East Tennessee-based group performs original songs inspired by a golden era of music, specifically the 1920s, 1930s, and 1940s. As the house band for Farm and Fun Time on Radio Bristol, the band has shared the stage with some of the nation’s top roots artists. Band members include Kris Truelsen (vocals, guitar), Kalia Yeagle (vocals, fiddle), Grace Van’t Hof (vocals, banjo), and Karl Zerfas (bass). Their debut album DreamSongs, Etc. releases August 24th on Jalopy Records. 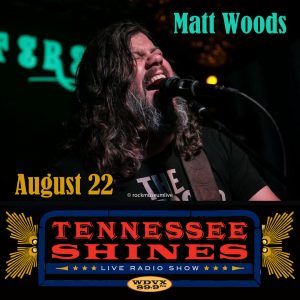 Matt Woods is an americana, country and southern roots songwriter from Knoxville, Tennessee who spends a hell of a lot of time on the road, playing his songs for anyone who cares to listen. “Some folks call what I do Americana, but I have a hard time putting a label on things like that. A lot of my songs are very much based in classic country music while others are grounded in straight forward and greasy rock’n’roll,” Woods explains. “I write what is ready to come out and try to be as honest as I can about it.”