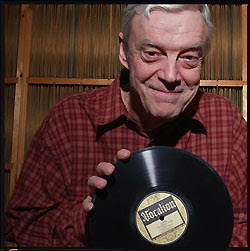 Joe Bussard is a collector. Specifically, he collects 78 rpms, but along the way over the past six and a half decades, he’s also collected his share of experiences and stories. He was gracious to do an interview with us in anticipation of the Knoxville Stomp.

Don’t miss An Evening with Joe Bussard, May 7th at 5 p.m. at Scruffy City Hall. He’ll be playing some things from the Box Set and hopes you’ll tune in or come down and listen. Joe is doing his show live from WDVX on Sunday, May 8th at 5 p.m. and you can listen in on 89.9 or WDVX.com.

Joe says he got into collecting records 65 years ago. His family had a 1941 table model wind-up Victrola that belonged to his dad, and the neighbors used to stop by and bring records to play. First, he heard Gene Autry, the early stuff, and liked the way he sang. Then, he heard Jimmy Rogers, and that did it. He says he remembered thinking Rogers was ten times better than Gene Autry, and that’s probably where Gene got his inspiration.

When Joe was 14, he started his own radio station in the basement of his house, even selling commercials for “a dollar a holler,” which got advertisers a 60-second spot. Eventually he was selling 25 commercials a day, which he reminded us was a lot of money back then. He said there was “no carryin’ on or horseplay,” but he had “all kinds of fun with it.”

Joe started going around, asking people about records. One lady gave him a box, and in it he found two Jimmy Rogers, among other things. Some of what was in that first box he liked, and some he didn’t. But one thing led to another and he started going out when he was 16, door to door. He says that’s when he got his first stack of Carter family records.

Joe says that the records he’d find ran the gamut, including lots of junk and some good ones. It was typical for him to get two big peach baskets full of records for fifty cents.

On any given weekend, he might have gotten 400 to 500 records. On a week’s hunt, maybe a thousand. He said he’d take fifty bucks with him for the entire trip, and end up spending more on food than records. He noted that gas was about 17 cents a gallon, and for another fifty cents he could get a roast beef sandwich, mashed potatoes and a drink.

Joe’s first radio show (besides the ones he did on his home radio station) was on Mt. Jackson, VA-based WSIG in 1955. They gave him an hour for his Country Classics, and after the 3rd week, about a hundred pieces of mail had come in. Said Joe, “People used to respond more in those days. I’d get requests, but also invitations to come stay at folks’ houses, or to come for supper, even marriage proposals.”

Joe got another show, this time on WELD in West Virginia, after he contacted the station’s program director to tell him what he was playing was terrible. They hit it off and Joe calls him “the nicest guy he ever met.”

Joe spent 52 years on that station, both on the a.m. and f.m. channels. Over that time, he got hundreds of pieces of mail and made quite a name for himself. He even judged fiddle contests. Joe said his listeners continued to reach out, many offering him a hundred bucks if he’d attend their family reunions. He notes that it was during the Carter administration and there was a gas shortage, so he tried to err on the side of being safe instead of sorry. But as things often happen, that station was taken over by new leadership and changed to disco.

Joe also had a show on WNCW in Spindale, North Carolina for 18 years. He can still be heard on WPAQ in Mt. Airy, North Carolina. In fact, he says the Monday after Easter, he did an all day live show (seven hours of airtime).

He started broadcasting on WDVX around the same time as WREK in Atlanta, and he currently has a Sunday morning show on WHUS, a station affiliated with the University of Connecticut.

Joe says he’s never seen music so overrated as it is today. He said people get excited for nothing. He recounts a time that Steve Allen played a Jelly Roll Morton tune on his show and the audience went wild. According to Joe, Allen said “Oh gee, I didn’t know you liked it.” For the record, Joe named Jelly Roll as the greatest piano player that ever lived.

Joe believes that you can’t have a radio station without a format. And he’s seeing more and more younger people liking the old music than ever before. He recently had a 16-year old fellow from Raleigh come visit him, and just last week five people came to visit him, all in their twenties from as far as Georgia, and Utah. 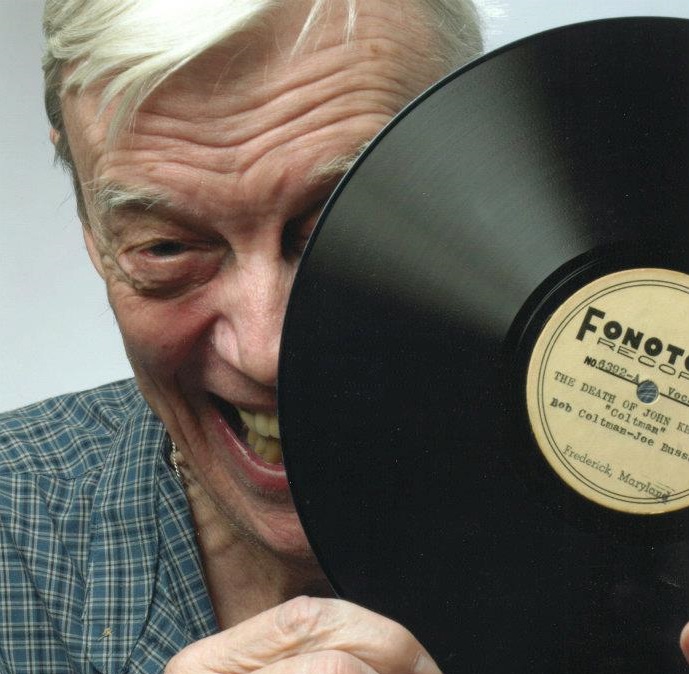 According to Joe, there are lots of younger people collecting records too, but he says there aren’t enough records to go around. “The wind up Victrolas were the worst thing to play them on, and they ruined a lot of records,” he says.

Joe recently got a letter from a 15 year old who wanted to hear “Dark was the Night, Cold was the Ground,” a Blind Willie Johnson record which he says is the greatest record ever made.

Joe also noted that a Blind Willie Johnson track was included on the Voyager Golden Record, and he hopes the “space aliens can fully appreciate it.”

On one hunting trip, he encountered a guy who had filled an old Chevrolet garage with records, and was selling them for 10 cents a piece. The dirty ones were free. There Joe found an Ernest Tubb bluebird, which he later sold to a museum in Nashville, which made the trip more than worth it.

Joe says that he always managed to end up in the right place at the right time. After taking a wrong turn looking for a flea market, he ended up picking up a hitchhiker and they got to talking about music. He told Joe he had a bunch of old records at his house if Joe wanted to come and see them. After driving 27 miles “into the sticks” Joe says he pulled a box out from under the bed with about four feet of dust on it. And inside was an Uncle Dave Macon, as well as Original Stack O’Lee Blues.

When he pulled out a Black Patti, Joe says his heart just about stopped. Then there were three more. Acording to Joe, Black Patti was a 1927 label named for a 19th century singer by the same nickname. Only 55 different discs were manufactured as the label ceased operations in the same year it started. So Joe says these are very rare.

Joe went on to say that musicians back then had fun making music. He believes that’s mostly gone, as it’s now done for money. He said that people who made old records got about $50 a side, which was a lot of money then, but they enjoyed what they were doing. They might have only earned $5 for playing at a bean stringing, a corn husking or a wedding.

He says it was a different world, with self taught musicians who, if they wanted music, had to play it themselves.

We asked Joe if he was still searching for records and collecting, and he said “Of course.” One record he’s still set his sights to find is by the Moore Family out of Nicholasville, Kentucky titled “Granny Will Your Dog Bite.” Considered a holy grail of sorts, no copies of this have ever been found. Another rare one that he’d love to come across is “Sally Johnson” by Rutherford and Foster, numbered 6913.

Joe Bussard says it’s a whole world out there that most people haven’t been part of. He has enjoyed it all, met some wonderful people, and he likes all kinds of stuff “as long as it’s good.”

With hunting records, he says you could go to a different house every night, and hear the greatest music you’ve ever heard. Said Joe, “they’re all gone, but the records are left. It’s exactly the way they did it. Every note’s the same.” He said record collecting gets under your skin, and he figures he’ll be doing it until they haul him off.