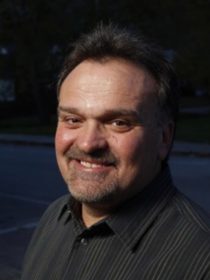 Steve Gulley is no stranger to bluegrass music audiences. The Cumberland Gap, Tennessee native has been entertaining folks with his own brand of music for many years. He’s a veteran performer and former music director at the legendary Renfro Valley Barn Dance and Jamboree, a former member of Doyle Lawson and Quicksilver and founding member of the award winning bands Mountain Heart and Grasstowne. He’s a multiple IBMA and SPBGMA award winner who is internationally known for his singing and songwriting in the bluegrass, traditional country and gospel genres whose music has taken him to 15 countries in Europe, Scandinavia, and South America as well as all over Canada from Prince Edward Island to the Yukon Territories. He has also been fortunate enough to perform on the Grand Ole Opry nearly 90 times. After these many years of being a part of so many great ensembles, Steve finally formed his own band, Steve Gulley & New Pinnacle in late 2014. The band’s first three recording projects have produced numerous songs in the national Top Twenty charts, including 4 which reached the number 1 spot. In addition to producing his own recordings with his band and as a solo artist, Steve is also co-owner of his own recording studio, The Curve, in his native Claiborne County, where he has also produced many critically acclaimed, chart -topping recordings for other talented artists in the bluegrass, gospel, and country fields. In 2016, in honor of his long musical career and help in the development of young and aspiring talent, Steve was awarded an honorary Doctorate of Music from Lincoln Memorial University. In addition to continuing to tour and record, Steve, in conjunction with LMU’s Arts In The Gap arts initiative, proudly hosts his annual Acoustic Music Week with Steve Gulley & Friends on the LMU campus. He is also a member of the Arts In The Gap board of directors. Over the past year, Steve served as Program Director of radio at LMU. Having grown up around a radio station with his dad, Don (a 40 year radio broadcaster), and given his East Tennessee/bluegrass music roots, he seems like a natural fit to host “Rize & Shine”. Steve has enjoyed a long relationship with WDVX and it’s musical community and looks forward to sharing his mornings and music with everyone.