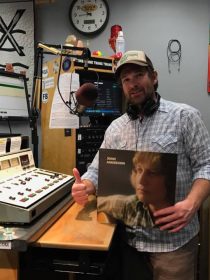 On Christmas Day of 1984 “Wild and Blue” host, Scott Phelps, received the album “Roll On” by country superstars, Alabama.  After countless hours of pushing rewind on a General Electric tape recorder, and believing “hot nacho!” (not “Cotton-Eyed Joe) was a reasonable lyric choice for a country song – his path was set. A path that would include exploring 50s rock and roll, 60s and 70s classic rock, 80s country, and 90s jam band rock.  However; it was always the songs that veered toward the country side that seemed to hit a little harder for Scott and ended up on repeat.  Finally, after a musical epiphany one day of “hey I like country music!” there’s been no turning back.  Since leaving no branch of the American roots music tree untouched, and digging into genres such as: bluegrass, old-time, alt-country, honky-tonk, rockabilly, and Cajun, Scott has a developed a deep respect and lasting love for the tradition of country music.  By hosting “Wild and Blue”, a show that focuses on late 70s, 80s, and early 90s country, Scott is thrilled to share with you much of the country music that means so much to him.

Scott holds a master’s degree in education from East Tennessee State University, where he also spent time working at the Archives of Appalachia.  During this time he specifically worked with the Stoneman Family collection and participated in the old-time and bluegrass music program.

A Midwestern by birth and a Tennessean by choice, Scott, with his wife and hound dog, is proud to call Knoxville home.  During the day Scott can be found telling stories, teaching kids, and checking out books as a public school librarian.  In his off time he plays guitars and fiddles, puts too many dollars in jukeboxes, hikes the Great Smoky Mountains National Park, and travels to music festivals.

Thanks for listening in, and be sure to send Scott a note there is an 80s country nugget you’d like to hear.