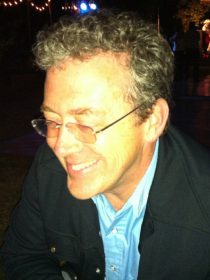 Scott Carpenter was born and raised in Blount County, Tennessee. His folks took the family to shows all the time – from Johnny Patrick at Shakey’s Pizza to the Grand Ole Opry. Beginning as a teen, he played in gospel, punk, and rock bands. Scott met his talented and musical wife while playing in a band called the Taoist Cowboys. In 1997, he got involved with a new little station known as WDVX. For several years he hosted the original Hillbilly Fever every Thursday night from the camper at Fox Inn campground. At some point, he added an extra hour of western swing and hillbilly jazz to his shift.

“I love music for more reasons than I can count. The Swing Set was part of the early programming here at WDVX and it was an honor to come back in 2012 and pick up where we left off with it. I really enjoy playing the 1930′s western swing – this great musical tradition really put a hook in me from the first time I heard it.”