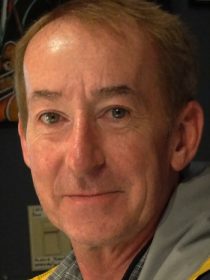 Paul started working as an intern in radio about 30 years ago. His first time on air was in an old FM station from in the midnight to 6am block on Sunday nights. That station was located in an old house built in the 1930s. Paul notes it was like WDVX because musicians back in the day would play live music in the studio. Some years later, he heard about a radio station that was broadcasting from a camper trailer nearby. Having almost given up on any radio in the market, he decided to give the camper crew a shot.

What struck him most was that the station had a program director who knew music and wasn’t under the influence of radio consultants controlling the programs. Paul knew Doug Lauderdale (the original host of Rumble), who put him in touch with Tony Lawson and in March of 2014, Paul came on as a host of WDVX.