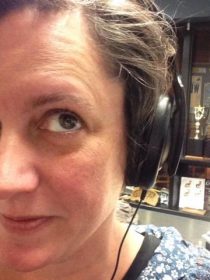 Born in Charleston, SC, Melissa put down some Knoxville roots in her early childhood when she spent many formative evenings at the Jubilee Center and Laurel Theater, soaking up traditional music and out-of-the-mainstream and homespun performing artists, including Wayne Bledsoe.

From the ages of eight to thirty-something, Melissa knocked around Florida, Paris, Virginia, upstate New York and Manhattan, picking up some broad musical tastes along the way. She pays the bills as a theatrical costumer and milliner, having worked on Broadway shows, opera, ballet and circuses. She currently manages the costume shop at the Clarence Brown Theatre.

In 2005, Melissa moved back to Knoxville with her husband and daughter and discovered WDVX. A couple of years later, on a lunch date with her dad Jerry and her old friend, Wayne Bledsoe, she mentioned a lifelong daydream about being on the radio. Wayne’s response was, “How about tomorrow night?” And that’s how she came to co-host All Over the Road.

All Over the Road