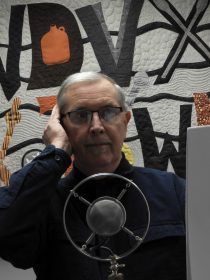 As a kid I would often fall asleep with a transistor radio under my pillow listening to night time Radio. After graduating from the International Broadcasting College, I worked at 2 small Midwest stations in West Central Ohio. A change in career moves led me in a different direction and I retired after 30 years with the Air Force Research Lab, Air Force Institute of Technology and the National Museum of the U.S. Air Force. Then I moved permanently to East Tennessee. I sought out and became an on-air volunteer at WDVX in 2012 and worked 5 years at a Campbell County radio station. I was fortunate to come on board as the Rize and Shine morning host in late 2018. “Music has always been a part of my life. My love for WDVX, its people, and musical diversity continues to expand”.