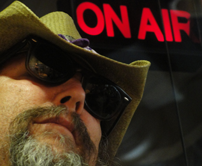 Jack Stoddart (Hippie Jack) moved to the Cumberland Plateau in Tennessee from South Florida in 1972 with his future wife Lynne (Mississippi) to pursue a career in fine art photography. After over 30 years of retail art shows, culminating in several museum installations, including the American History Museum and the Smithsonian, digital photography changed the nature of things, rendering silver gelatin print making impossible. At this point Hippie and his family turned to video and started an Americana Roots TV show, Jammin at Hippie Jack’s, that first appeared on the smallest PBS affiliate in the country (WCTE-TV). This series went national 5 years ago and after 8 years of recording music for the TV show, Hippie Jack turned these archives into the radio show for WDVX.