Rest in Peace. Our friend & original producer & brain child of “Rumble” on WDVX.

Douglas Allen Lauderdale (Doug, Doogmon), Age 59, of Seymour, passed away Friday, July 27, 2018. He was born in Dover, Delaware December 23, 1958. During his life Doug was a Marine, coal miner, carpenter, prison guard, pawn shop clerk, cook, bartender, and a working cowboy. He is best known as the host of his WDVX Radio Show the “Rumble”. Music has always been an important passion for Doug. He loved-Rock-A-Billie, Classic Music, and Americana. Doug worked as a DJ at stations in Knoxville, Madisonville, Nashville, and Denver. Doug is preceded in death by his parents, James L. and Mary Lou Lauderdale, uncles, Roger Dale Jones, and Cecil Jones, grandparents, Ernest F. and Ruth Jones, Donald L. and Ruth Lauderdale, Charlie and Marie Smith. Doug is survived by: daughter, Allison Lauderdale, granddaughter, Evie Lauderdale, brother and sister-in-law, Darrel and Traci Lauderdale, aunts and uncles, Mickey and Kenny Whittenbarger, Bonnie and Earl Keck, Bob and Joann Ogle, Dorothy and Ron Takacs, and his most incredible fans who tuned in to the Rumble! Special thanks to his incredible friends, Paul; Amero, Al Fox, Tony, Rachel, Katy, “Red”, Nita, and the entire staff of WDVX Radio! The family would also like to thank and acknowledge the care the incredible staff at Fort Sanders Regional Hospital gave to Doug. A Celebration of life will be held 7 PM Thursday September 20, 2018 at Barleys Tap Room in the Old City.
Published in Knoxville News Sentinel on July 31, 2018

Below is the bio Doug wrote himself for this page.

Rumble host Doug Lauderdale was born to love rockabilly. While pregnant with little Doug, Ma Lauderdale burned up the piano playing rockabilly tunes such as “Blue Suede Shoes.” Music has always been in his blood and Doug has worked as a radio announcer in Knoxville, Nashville, and Denver, and at one as a professional karaoke singer. These days, he is a stagehand setting up shows at local and regional theatres and festivals. It’s one of his favorite gigs in a long line of professions that include the Marine Corps, coal miner, prison guard, pawn shop clerk, and working cowboy.

“‘One for the money…’ and hooks like that excite me to spin rockabilly and all its cousins, but I might just throw in a line about my colorful past to spice up the show.” 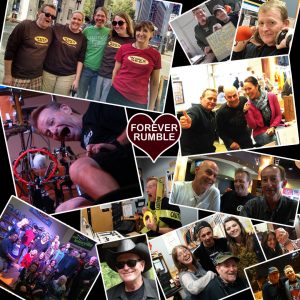