WayneStock: For the Love of Drew 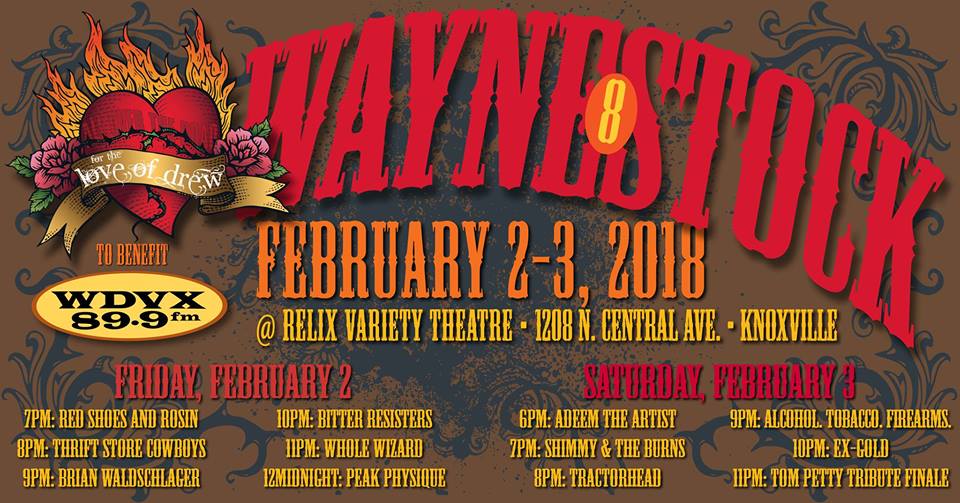 If you’re interested in volunteering send an email to volunteers@wdvx.com !

Waynestock: For the Love of Drew, Knoxville’s premier celebration of local music, will return on Feb. 2-3, 2018, at the Relix Theatre, with 11 Knoxville-based artists and a finale tribute to the late Tom Petty. Now in its eighth year, Waynestock was begun in early 2011 by music communty friends of longtime Knoxville music writer Wayne Bledsoe when his oldest son, Andrew died suddenly on Dec. 10, 2017. Knoxville music favorites staged a three-day event to honor the family, raise funds for funeral expenses and simply support their family in their time of grief. The festival returned the following year to support the family of musician Phil Pollard, who died in late 2011, and has since become an annual event that both raises money for local charities and celebrates the Knoxville music scene.

Waynestock 2018 will benefit community-supported radio station WDVX, which has championed local music artists since its founding in 1997. All profits made from the festival are donated that year’s cause. Former beneficiaries are The Community School for the Arts, The Jellinek Center, University of Tennessee radio station WUTK, Knoxville Girls Rock Camp, and The Pilot Light.

Over the past few years, Waynestock has been trimmed from three to two days. Traditionally featuring a wide variety of artists, the 2018 event will feature everything from folk to punk rock to hip hop and pop, along with Americana. The finale will feature a number of Knoxville music greats performing songs by Tom Petty, who died earlier this year.

Admission is $5 each night and all ages are welcome. Relix Variety Theatre is located at 1208 N. Central St. For more information visitwww.waynestock.org.