Driven by rich vocals, electrifying leads, and boot stomping rhythms is up-and-coming husband and wife duo known as LYN AVENUE bringing you honest, compelling stories about life in the modern South. Both born and raised in Savannah, GA, Lyn Avenue is comprised of songwriters CC Witt and Patrick Ellington. Their writing style is rooted in sharp lyricism and memorable melodies, organically blending elements of Americana, Folk and Classic Country with just the right amount of southern charm. There is always a story to be told with Lyn Avenue and you can guarantee that you’ll be wanting to sing along.

In February 2018, Lyn Avenue released an EP titled, “Never Been to Nashville” featuring six songs, including their single “Kentucky Bourbon”, a clever boot-stomping drinking anthem that according to A&R Factory, is an “authentically country song.” The single hit 50,000 views on social media and continues to grow. Since then, Lyn Avenue has toured the Southeast, garnering the attention of fans transcending the limitations of genre.

At the start of 2019, Lyn Avenue hit the ground running, performing in Centennial Olympic Park for Super Bowl LIVE (Superbowl LIII) presented by Verizon. Later that year, Lyn Avenue made their CMA fest debut on the Spotlight Stage in Nashville, TN and was featured on Georgia Public Broadcasting in relation to the Ken Burns’ documentary, Country Music. That same year, Lyn Avenue was selected and featured for the #JoleneChallenge hosted by Netflix and Dolly Parton. Lyn Avenue has been nominated for Best Country Band by the Georgia Country Awards for the last 3 years. The duo has also opened for a number of country stars such as: Chris Janson, Parmalee, Easton Corbin, Lonestar, Jerrod Neimann and others.

Lyn Avenue’s latest release, an all original EP titled Sophisticated, features five masterfully crafted songs chock-full of classic country vibes. The new EP includes the much anticipated song, Hurricane Bride which hit 150,000 views on the music video within the first 3 months of its release. The song has been aired on several international radio playlists as well as added to the Acoustic Rainbow Roots Sampler compilation which was released in December 2020 and is currently being delivered to over 1000 radio DJs for extensive airplay in the U.S. and abroad!

WEBSTER’S WHEEL are a rising acoustic indie folk duo from the southern hills of Alabama. Their captivating harmonies, poetic lyricism and southern charm are a surefire heart revival. To quote one reviewer at IndieShark Music Magazine, “It’s hard to avoid getting lost in the sonic gaze generated by these two when they’re clicking like nobody’s business.”

Daniel and Marie played their first songs together in a little country barn with 10 chickens, 3 dogs, and a 50 sq ft vegetable garden. The duo combines iconic mid-century folk sounds with a southern twist of bluegrass and country that take listeners on a thoughtful journey. The words that the singers breathe into life are inspired by their uplifting spiritual values and have been described as “the most profound lyrics in the history of the room” by Jim Pennington, owner of The Peoples Room of Mobile.

Webster’s Wheel recorded their first live EP with Grammy award-winning producer Larry Mitchell and have since released three full-length albums and made numerous tours across the southeast. In August 2021, the duo launched their Milk & Grass Tour with the release of their third album Milk & Grass. Ballyhoo Magazine says, “Milk & Grass captures the Alabama twosome sounding more divinely in touch with the medium than ever before.” 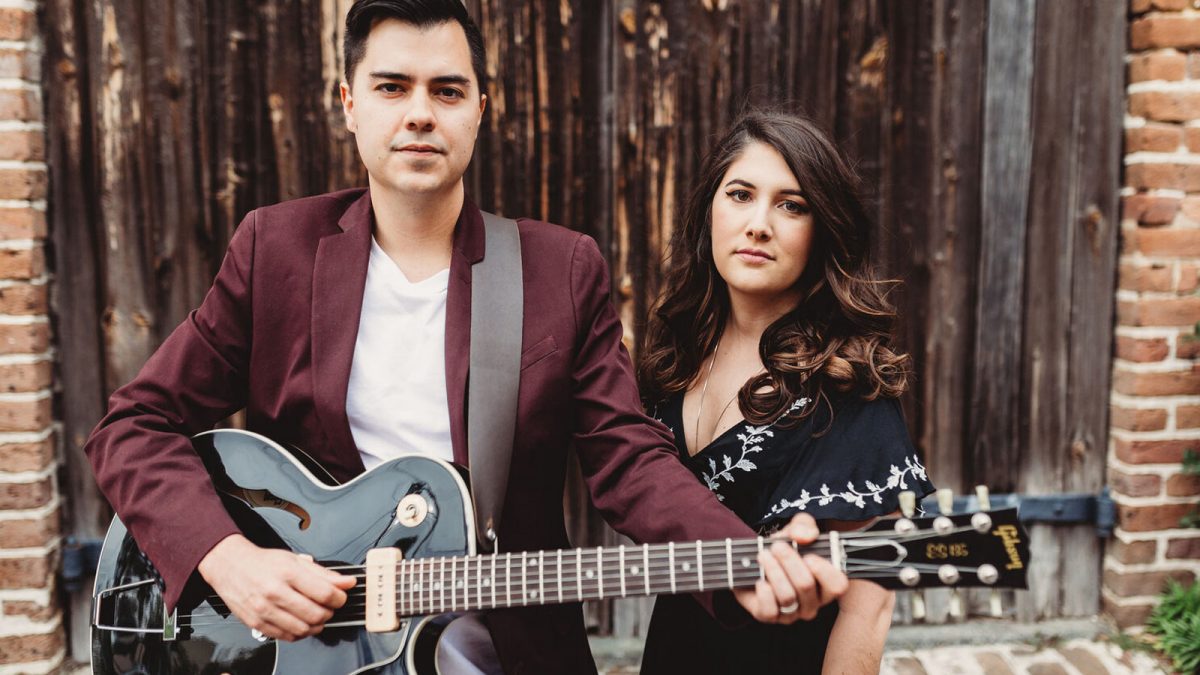