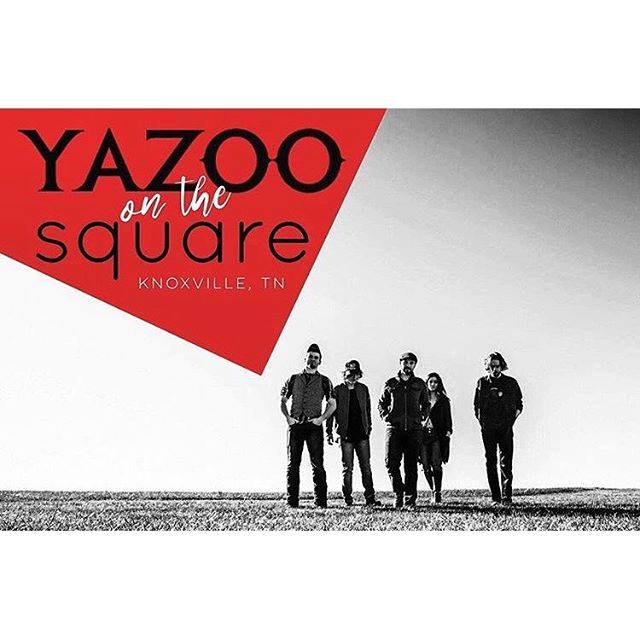 Josh Shilling of Mountain Heart is joining us for Yazoo on the Square on September 2nd. Yazoo Brewing Company and WDVX are bringing live music to the Market Square Stage this Friday, September 2nd! Live music will be provided by Mountain Heart, 6ix Mile Express, & rising 17 year-old blues guitarist Austin Crum of the Austin Crum Experience.

Free & open to the public, with festival seating! Music starts at 5:30 pm. Refreshing adult beverages will be for sale from Yazoo Brewing Company. The proceeds of these sales will benefit WDVX.
For more information send an email to info@wdvx.com.

Versatile singer/songwriter Josh Shilling boasts an impressive combination of experience and musicianship. Shilling’s musical forays have been diverse and considerable, ranging from jazz and soul ensembles to americana and contemporary country, jam-band, bluegrass and folk projects.

A Martinsville, Virginia native, he began playing the piano at a mere 7 years old. As a child he matured into a skilled pianist and Hammond B3 player whose voracious musical study allowed him to authentically portray the style and feel needed for nearly all genres. Shilling also developed steadily as a guitarist, while honing his natural emotional vocal ability, which has become his calling card.

As a teenager, Shilling fielded offers to tour nationally with professional bands, and at 17, he graduated high school one year early to begin his musical pursuits. He began traveling with successful regional groups from Roanoke, Virginia. The deceptively junior new member stunned audiences with his soulful vocals and confidence. Subsequent gigs soon followed with nationally touring artists including Cimmaron, country star Billy “Crash” Craddock and Chicago’s Bill Champlin, who proclaimed Shilling “has the potential to be one of the greats.”

Esteemed trumpet and trombone player Mic Gillette also enlisted Shilling’s services. Stints with members of group Tower of Power, along with crowd-pleasers The Embers, expanded his musical palate. His collaborations with Gillete prompted the revered musician to dub Shilling the “real deal.” Continually perfecting his sound and delivery, he began to perform at least 200 dates a year across the nation.

“He’s going to fit right in with Mountain Heart’s signature sound, while bringing some new dimensions to their music…there’s no apparent limit to the upper end of his range.”

“now the Mountain Heart sound is capped by a voice that echoes not of just the mountains but of Memphis or Muscle Shoals…one resists putting too much emphasis on any one guy in a band, but there’s no denying the transformation Shilling has enabled, with his multi-instrumental skills, his diverse musical background and most of all his gigantic, soul-stirring, southern rocking voice!”

The same year, Shilling wrote or cowrote all of the four new songs featured on the group’s live album, The Road That Never Ends, including project’s title track, which reached the forth slot on Billboard’s bluegrass chart.

Mountain Heart’s January 2007 appearance on the Grand Ole Opry introduced Shilling to an eagerly receptive crowd; after singing one of his original songs, he earned a standing ovation and encore that evening – a rarity and intoxicating distinction for any artist on that revered stage. Since that night, Shilling has played on the Opry over 50 times, toured as part of Lynyrd Skynyrd’s 2008 summer tour, toured with artists like The Marshall Tucker Band, The Avett Brothers, The Lee Boys, The Traveling McCoury’s, legendary guitarist Tony Rice and many many more.

July 31, 2012 marked the official release of Shilling’s debut solo project Letting Go. After years of writing and recording for other acts, Shilling meticulously selected songs from his catalog and set out to produce and release a project of his own. Overwhelming reviews poured in as listeners and supporters downloaded and ordered the project, many of which say this in so many words:

“Before you click purchase, let me warn you; if you like your music synthesized, auto-tuned, watered down and brain-less, move along. But if you enjoy well-written lyrics and music and emotional vocal performances, buy this CD now. These are quality performances by real musicians. Just be careful where you leave this CD lest it gets stolen”

Now a full-time studio musician and songwriter in Nashville, Shilling continues to perform solo, with Mountain Heart, and guest appearances with artists who inspire him also line his schedule. He embraces music in its totality: His fierce immersion in one genre is enhanced by his passion for the others. Josh Shilling’s future promises both success and tireless innovation guaranteed to delight music lovers all over the world.

While his career already includes performances on hundreds of albums, dozens of songs recorded by various artists, and touring internationally, 2015 is slated for even more.  A new Mountain Heart project will be released, which faithfully showcases Shilling’s incomparable songwriting and musical abilities on every track. Plans are also underway for his second solo album with hopes of a label release in 2016.

We are thrilled to have Mountain Heart performing at Yazoo in the Square. In the meantime, enjoy this Bullet Backstory from Josh himself. He was gracious enough to answer our questions for this regular feature on the WDVX blog.