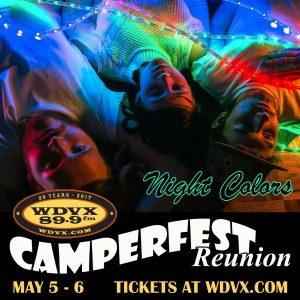 East Tennessee’s Own, Night Colors will be joining us for the Camperfest Reunion! Camperfest Reunion celebrates the iconic WDVX 14ft Camper Broadcast Studio that started it all in 1997 and the Camperfest Americana Music Festival, which happened from 1998 – 2007. This was WDVX’s annual happening where the station threw a great party that brought listeners and local and national artist from near and far together for a weekend of great music and fellowship.

Help support WDVX during our 20 year anniversary celebration by attending the special Camperfest Reunion May 5-6 at Dumplin Valley Farm in Kodak, TN just 25 minutes from downtown Knoxville. Click here for more information and to purchase both day passes and weekend passes. In the meantime, enjoy this Bullet Backstory featuring Elijah Cruise of Night Colors! He was gracious enough to answer our questions for this regular feature on the WDVX blog.

What made you decide to pursue music as a career? Music was an escape, it was always a huge part of my life. It made even the worst days beautiful. I couldn’t think of anything else that would bring as much happiness to me, as this does. I remember sitting in the kitchen growing up listening to records with my parents and thinking to myself, “One day this will be me, I just know”.  I feel the same way to this day.

What advice do you have for young musicians who are trying to hone their craft? It doesn’t matter what people say about your music. You’ll have fans and you’ll have critics. If it means something to you then do it! Music is such a personal thing that even if no one ever listens to another song, I’ll keep playing. So keep playing because the world is eager for creativity. Learn from the critics & love the people who have always supported you, since they’re the ones that’ll always matter.

If you could work with any musician (living or deceased) who would it be and why?  David Bowie, George Michael, Freddy Mercury, Dan Fogelberg, John Lennon & Amy Winehouse for obvious reasons (they’re the kings/queens)

Anything else you would like to share? Favorite WDVX memory, etc? We can’t wait to play Camperfest! Our last experience with WDVX was at the grand re-opening of WDVX as “Hazel”. Since the name change this will be our first performance with WDVX as “Night Colors” and we can’t wait to show you what we have to offer.