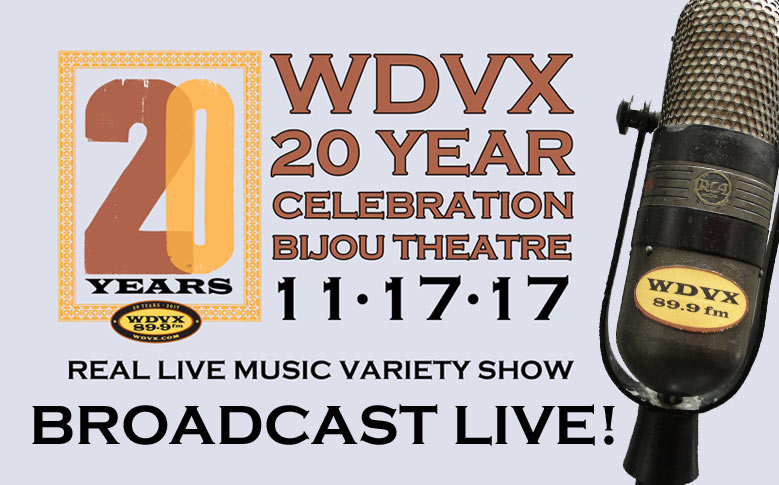 Sold out concert will be broadcast live on WDVX and WDVX.com

“When I think of WDVX, I think of community radio. I know it stretches a lot further than just the community, but it captures the spirit of the place. It’s much more than just a radio station. It feels like a friend.”

From its humble origins situated in “The Camper” located in the Fox Inn Campground north of Knoxville, through to its present stature as one of America’s — make that the world’s — foremost authoritative voices for authentic Americana and grassroots music, WDVX has established an enviable niche in the realms of roots music and other indigenous forms of folk, rock, blues and country. Lauded by listeners and artists alike, many of whom received their initial exposure on the station’s airwaves, WDVX has become a true bastion of Americana and traditional music in all its many forms.

To commemorate that remarkable legacy, the station will present the WDVX 20 Year Celebration on November 17, 2017 beginning at 7:30 p.m. EST at the historic Bijou Theatre in downtown Knoxville. The concert, which is sponsored by Sweet Audrey’s Jazz Club (opening in 2018) and Boyd’s Jig & Reel, will also be broadcast live on WDVX.

WDVX Board President Matt Teglas said of the 20 year milestone and upcoming celebration concert, “WDVX is a vital part of East Tennessee’s cultural and community fabric. The 20 year celebration at the Bijou is a wonderful example of the grassroots effort that has provided a voice to East Tennessee and worldwide roots music artists.”

“So thankful to see WDVX reach this milestone!,” WDVX founder, Senior Creative Consultant and On-Air Personality Tony Lawson commented. “May it continue to work with East Tennessee communities to help make our region a better place to live, work and play.”

“WDVX has had a great year celebrating two decades of Americana Roots radio in East Tennessee,” said Program Director Katie Cauthen, “And while 2017 has been about looking back and reflecting on WDVX’s unique history, we are excited for what is to come in 2018 and beyond. WDVX has grown into an internationally known, yet tight knit community for music fans, and we will continue to bring with much enthusiasm the quality programming and events that we are proud to call East Tennessee’s Own for years to come.”

Each portion of the live variety show will be introduced by a WDVX personality, along with a special set focusing specifically on East Tennessee artists, hosted and curated by Cruz Contreras and Sam Quinn, from Knoxville’s own nationally-known band The Black Lillies. In addition, two-time IBMA award winner Phil Leadbetter has gathered many of the leading lights of the Bluegrass world — among them, Claire Lynch, Steve Gulley, Kenny & Amanda Smith, Missy Raines, Paul Brewster, Adam Haynes, Alan Bibey, Alex Leach, and Jason Burleson — for a special performance that promises to be one of many remarkable offerings showcased throughout the evening.

Produced by WDVX, the festivities will also feature a special tribute to the Everly Brothers and great moments from Knoxville’s musical history.

East Tennessee’s Own WDVX is a listener supported public broadcaster heard locally on 89.9, 102.9, and 93.9 and streaming on WDVX.com. WDVX is a service of Cumberland Communities Communications Corporation, a 501c3 organization.

Broadcasting from the Visitor Center in Downtown Knoxville, WDVX is recognized throughout the world as one of the nation’s foremost Americana outlets. Officially founded in 1997, its history reads like an all American success story.

Today, WDVX brings residents of East Tennessee — and the world, by way of streaming content — a varied assortment of music representing the best of Americana music in general, and the finest representation of regional arts and culture. It has played an integral role in helping to expose the talents of hundreds of both established and emerging artists making music in a variety of genres, including Americana, roots, blues, bluegrass, rock, folk and country. In addition, it creates and provides content to promote the cultural heritage of East Tennessee and the Southern Appalachian region by entertaining and educating audiences globally with original programs showcasing live radio performances, underrepresented arts, and emerging and local talent.

The station has received press coverage and kudos locally, nationally and internationally, including “ABC World News Tonight with Peter Jennings” The Atlanta Journal Constitution, No Depression, PBS, the BBC, and outlets as far away as Australia, New Zealand, and Israel.

Darrell Scott is one of the preeminent singer-songwriters in Americana music. A superb performer and instrumentalist, he’s maintained strong ties to East Tennessee while also collaborating with such iconic artists as Robert Plant, Steve Earle, Guy Clark, Emmylou Harris, and Sam Bush, to name a very few. With more than a dozen albums to his credit, he’s continually maintained a standard of musical excellence throughout his more than 20 year career.

Often compared to James Taylor and Paul Simon in his ability to craft beguiling narratives that ring with honesty and sentiment, Sam Lewis has established himself as a singular singer and songwriter of a classic caliber. His performances offer an adept combination of humor, heart and beautiful balladry, A native of Knoxville and now living in Nashville, Sam is preparing for the release of a new album in early 2018.

Singer-songwriter, band leader, and Grammy nominated producer David Mayfield stepped out of the shadows with his 2011 album The David Mayfield Parade. Its follow-up, Good Man Down, was self released and funded with a surprising successful Kickstarter campaign that more than doubled its initial goal of $18,000. His latest, Strangers, attracted further critical kudos. After witnessing his performances with The Avett Brothers and Mumford & Sons, and appearances at Bonnaroo, audiences have come to appreciate both the charisma and comedy Mayfield’s concerts have to offer.

Often referred to as the poet laureate of East Tennessee, RB Morris is not only a singular songwriter but also an author, historian and playwright as well. Having garnered a much admired national reputation through an ongoing series of incisive albums, RB’s heart and loyalty remain firmly implanted in his native soil. Initially inspired by both Beat literature and Bob Dylan, he first came to the attention of John Prine, who signed him to his Oh Boy label and released his debut album Take That Ride in 1997. Happily, that ride has maintained its momentum ever since.

Robinella is rightfully considered one of the true queens of the East Tennessee music scene courtesy of a career that dates back nearly two decades and a sound that seamlessly blends bluegrass, folk, jazz and country in entertaining and exceptional ways. In addition to her legions of local fans, she’s also accumulated an enthusiastic national following that eagerly anticipates of upcoming effort. Her latest album, Ode To Love, was no exception.

Bassist, singer, songwriter, and teacher Missy Raines reigns as one of the leading lights of Bluegrass. A seven time winner of the prestigious International Bluegrass Award for Best Bassist, she began performing as a teenager and currently counts among her credits work with Mac Wiseman, Peter Rowan, Kate Campbell, Alison Brown, April Verch, Laurie Lewis and dozens more. To date, she’s appeared on approximately 30 albums, a much in demand instrumentalist, songwriter and auteur.

Claire Lynch boasts an outstanding reputation as one of the best singers, songwriters, and producers currently operating within Bluegrass realms. A three-time winner of the International Bluegrass Association’s Female Vocalist of the Year prize, she’s widely recognized as one of the best performers the genre has to offer. An original member of the Front Porch String Band, she began her solo career 35 years ago, briefly reuniting with the band in 1991 when they temporarily reconvened. These days, she’s best known as an exceptional solo star whose prodigious efforts attract both admiration and anticipation.

A renowned artist in his own right, Alex Leach is well known to WDVX listeners courtesy of his duties co-hosting the Bluegrass Special with Charlie Lutz each Tuesday at 7 p.m. His freestyle approach to banjo has made this young artist a popular homeboy here in East Tennessee while gaining him a reputation as one of the leading lights of the contemporary Bluegrass scene. Needless to say, his albums New Traditional and Mountain Heartache are well worth checking out.

Jill Andrews, formerly a member of Knoxville favorites The Everybodyfields, has gone on to establish a solid solo career with a compelling catalog all her own. With two albums and an EP to her credit — her latest effort, The War Inside, was released in 2015, she’s established a solid reputation as one of the finest singer-songwriters to emerge from East Tennessee.

Alison Krauss - I Will - Within Reach
Listen Live →